I have been playing in bands for what seems like a lifetime. I guess it probably is. I will try and give you a bit of a chronology but sadly the 80’s got in the way and the memory is a tad rusty. My oldest and dearest friend Colin Freeborn (Bolly to those who remember him) can undoubtedly tell you more about what we got up to than sadly I can remember. Well here goes!

I am currently bass guitarist for UK melodic progressive rock band The Room. I formed a band with ex Grey Lady Down vocalist Martin Wilson and his very best mate, drummer Andrew Rae in 2010 tentatively called Big Fish. A quick line up change and we got on with life as The Room. More about them later. 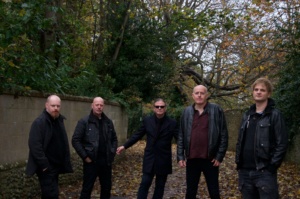 OK starting from days at school, well after learning a bit of violin and piano, I discovered the murky world guitars, when my folks bought me a Kay 6 string when I was about 13 I think. I didn’t play it much at all except alongside my good mate Colin who you have already been introduced to. 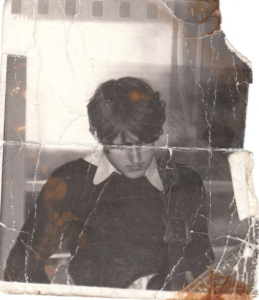 This picture is certainly the earliest of me after swapping to bass. I’m playing a EB copy of some sort. Colin and I decided that a band was the way forward and we formed Jackal whilst we were both still at school. We were joined by a wild drummer called Andy who threw so much energy into each number he was knackered after just a few mins.

We played a couple of shows at school (the first on 7/7/77) and a few local club gigs. It was rough, it had energy and was a great place to learn. Our first show at my school was in the main hall and we needed some back line. A guy in the village had some and lent it to us for the night. He was a certain Paul Kossoff’s manager and these Marshalls rolled off the van with Koss sprayed on the covers. 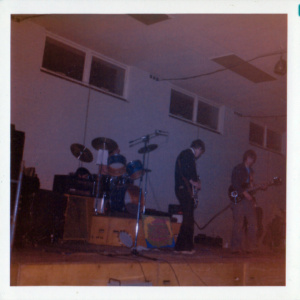 After leaving school I joined Reading based NWOBHM outfit Firebird in the late 70’s, and hit the rock charts with a single produced by Deep Purple vocalist Ian Gillan getting up to number 8 I think. We played loads of shows around the Reading area with Gillan even coming to see one of them.  I carried out the role of lead vocalist for most of the set.

As members of the band headed off to University of all things, I then joined London band Prime Cut with ex The Nice drummer Brian Davison in the early 80s. With the media raving about the band and playing to packed houses across London I left the band in 82 I think. From what I remember we had an amazing ride in that band, so close to success and yet so far. 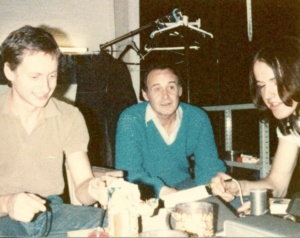 This photo (left) shows me with guitarist Johnny and the late Blinky Davison. Here we are pictured (right)  a couple of years later with Paul Cuthbert (Chops) who picked up drumming responsibilities from Brian.

After Prime Cut and a short break from music came “One Way Street”. Think Bad Company meets Thunder. Oh and the longest hair I ever had, before it all fell out of course. We played a few shows around Reading and called it a day after a couple of years. It was enormous fun and very, very loud, I remember destroying the interior walls of a rehearsal studio with just bass level. Note the hair in this pic oh and my beloved Overwater OS. 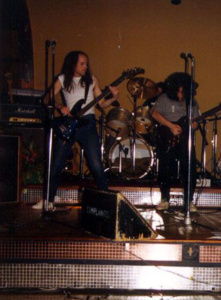 A couple of years into “retirement” I got married (to Mrs Andy obviously) and decided to take a permanent break from the business, in fact, a break that lasted almost 25 years. Working in the motor industry I discovered that my previous experience of being on stage in front of a crowd put me in a great place to start hosting the companies events and particularly motorsports ones BTCC / F1 etc. It was that experience that led me to my current vocation as a Voice Over Artist. (Prog doesn’t pay!). Check me out at Voice-over.org.uk

Whilst I wasn’t playing in bands I found an even better way to reduce my kids inheritance and that was Rallying. Over a few years in the nineties and early noughties I won the South of England Tarmac Rally Championship and many class wins on events across the UK and also the prestigious Belgian National Rally Championship. 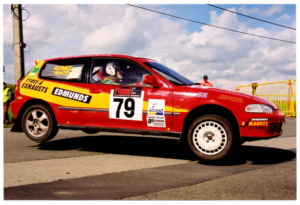 After working for Honda I joined a live event and video production company and whilst there came into contact with loads of bands and musicians. That influenced me to get the bass back out and I joined a covers band The Scam# playing local pubs. Deciding that I wanted to get back to original music I answered an advert and went to meet Martin Wilson and Andrew Rae at a rehearsal studio in Farnborough “The Rooms”. That audition in 2010 was the start of the band I play in to this day. Joining Martin, Andrew and myself were Steve Anderson (ex GLD) on guitar and Steve Checkley on Keys. Sadly for us all, Andrew had to quit the business due to the onset of tinnitus and was replaced by Chris York. We have so far released two albums: Open Fire and Beyond The Gates of Bedlam and a DVD Live at The Robin 2. 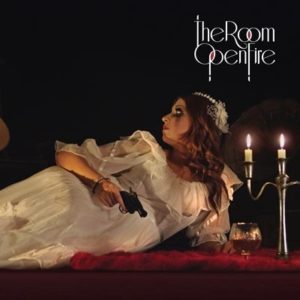 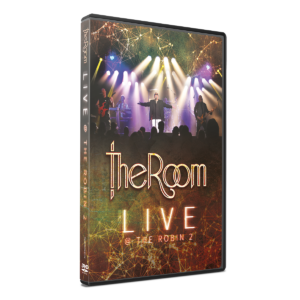 So we make it back to the top, with a live DVD and two albums released, some amazing fans and the continued support of all those dear to my heart. Thank you so very much, it means the world xx

As Crazy As it Seems